Bear in Mind: Occom, Wheelock, and the Contested Spaces of Early American Education in New England 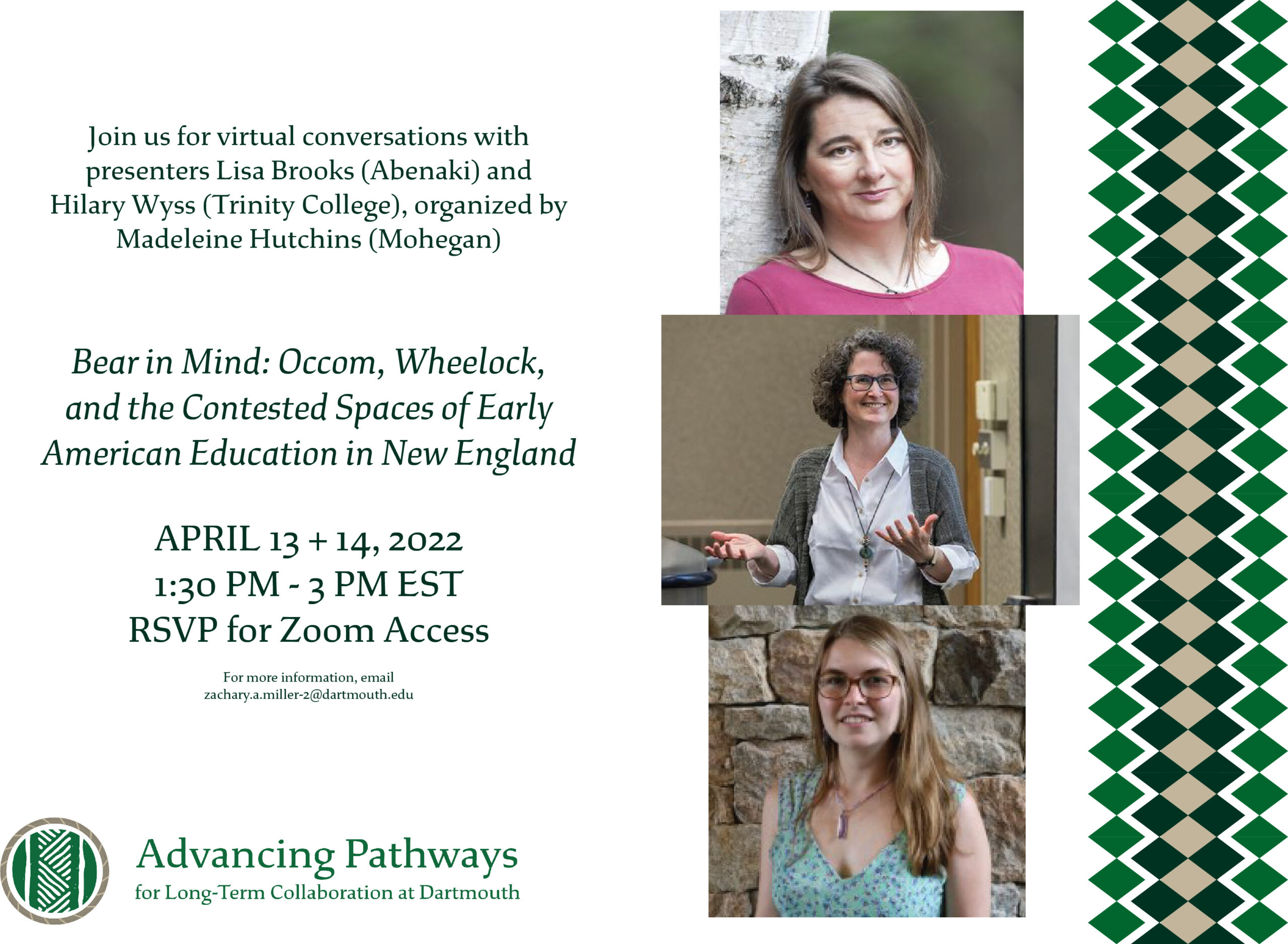 On April 13th and 14th at 1:30 PM the Hood Museum of Art and Dartmouth College Library  hosted a virtual lecture as a part of Dartmouth’s Andrew W. Mellon Advancing Pathways for Long-Term Collaboration grant. The workshop, titled “Bear in Mind: Occom, Wheelock, and the Contested Spaces of Early American Education in New England” featured scholars Lisa Brooks (Abenaki), Professor of English and American Studies at Amherst College in Amherst, Massachusetts, and Hilary Wyss, Professor of English at Trinity College in Hartford, Connecticut. Organized by Madeleine Hutchins (Mohegan), this program was second in a series dedicated to improving upon the College Library and Hood Museum’s collaborative effort towards increased self-awareness in stewarding and teaching with Indigenous-related collections. Group readings were distributed in advance of the workshop, informing attendants, and providing context for each speaker’s engaging discussion references.

Fruitful conversation emerged in the sessions about how staff can center indigenous related issues that might require close attention in their work.  In our case, anticipating the upcoming repatriation of the Occom Papers to the Mohegan Tribe, we chose to highlight Samson Occom the Mohegan co-founder of Dartmouth College. Occom raised funds in 18th century Europe to start a college originally chartered in New England for Indigenous students.  When he arrived home, Eleazar Wheelock had, to Occom’s disbelief, done the opposite, starting a school without any indigenous students at all. Much of the point of this workshop was not only to feature the betrayal of Occom by Wheelock, but to acknowledge that Occom lived a rich life of servitude to his religion and to many other indigenous communities. Together our group discussed that when we tell the story of Dartmouth, it’s vital to include a narrative that goes beyond the myth of Dartmouth by centering the stories of Indigenous lands and people.

Madeleine Hutchins (Mohegan) collaborated with Advancing Pathways leadership after the workshops to create a reference document full of information related to the life of Samson Occom for on-campus reference. Everyone on the Advancing Pathways team is grateful for the enthusiasm and contributions made by all the individuals who made this workshop possible.